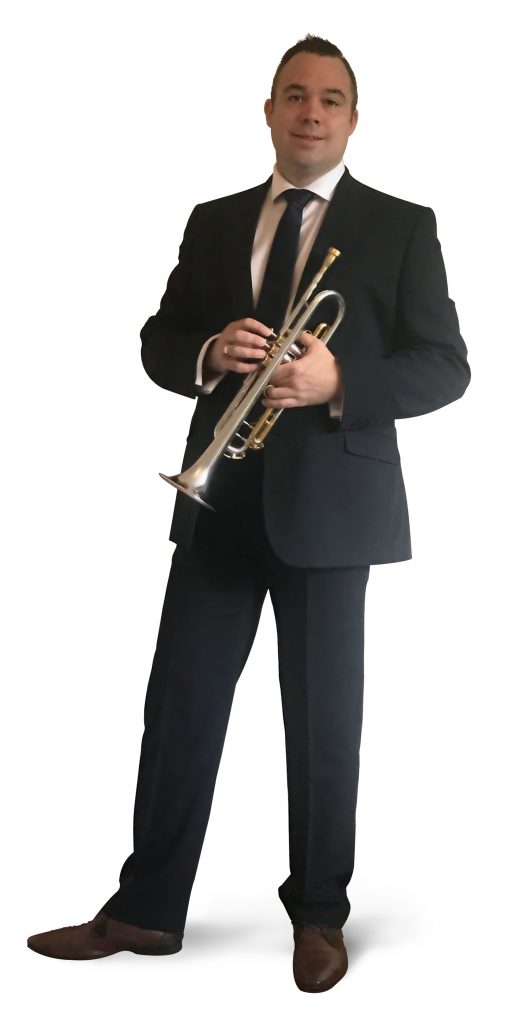 Mark began studying the trumpet at the age of six. His parents encouraged him throughout his early years, having been professional trumpet players themselves. He soon developed a passion for playing the trumpet. Whilst in his teens he played in various bands including The Kent County Youth Orchestra, The Railway Swing Band and Betteshanger Brass Band.

In 1997 Mark Studied at the Royal Marines School of Music where his outstanding ability was quickly recognised, he won The Parker cup prize for best performing brass player at the school in 1998 and 1999 and also won a bronze medal from the worshipful company of musicians in London. At this time he was given the enviable opportunity to study and advance his big bands skills with the world-famous trombone player and bandleader Don Lusher. Mark also studied with the British trumpet legend, Derek Watkins, one of the worlds best all-round trumpet players.

Mark was the principal trumpet player for the Band of Her Majesty’s Royal Marines (The Royal Band), regularly appearing in front of The Royal Family for a variety of events and solo performances including numerous birthday celebrations for Her Majesty the Queen.

Mark is a well respected Trumpet teacher and has been teaching for many years. He also teaches online via FaceTime and Skype from pupils around the world. In 2014 Mark became the trumpet tutor at The Royal Marines School of Music, where he studied, back in 1997.

Mark’s extensive touring has seen visit to various parts of Europe, the United States of America, South America, The Caribbean, Russia, Turkey, Japan, Dubai, India, New Zealand and Australia. He has performed at some of the best venues in the world, including solo performances at the Royal Albert Hall, London live film premieres, West End shows and the London Olympics 2012. Mark also led the trumpet section of the stage orchestra for ITVs BAFTA winning live broadcast of the Queen’s 90th Birthday Celebration at Windsor in 2016.

In 2012 Mark was endorsed by Eclipse Trumpets – The UK’s leading trumpet maker. He has since been working closely with Leigh McKinney in developing an Artist Series model trumpet, now available at Eclipse Trumpets UK.